Members of Wise County Historical Society traveled to Saltville in the Spring of 1996 seeking information on the town for the first issue of our magazine, “The Appalachian Quarterly,” (Editor: Rhonda Robertson). It was a very interesting and rewarding trip. From the June issue of Appalachian Quarterly, the following excerpts: Saltville Boasts A Long And Rich History by Roger A. Allison 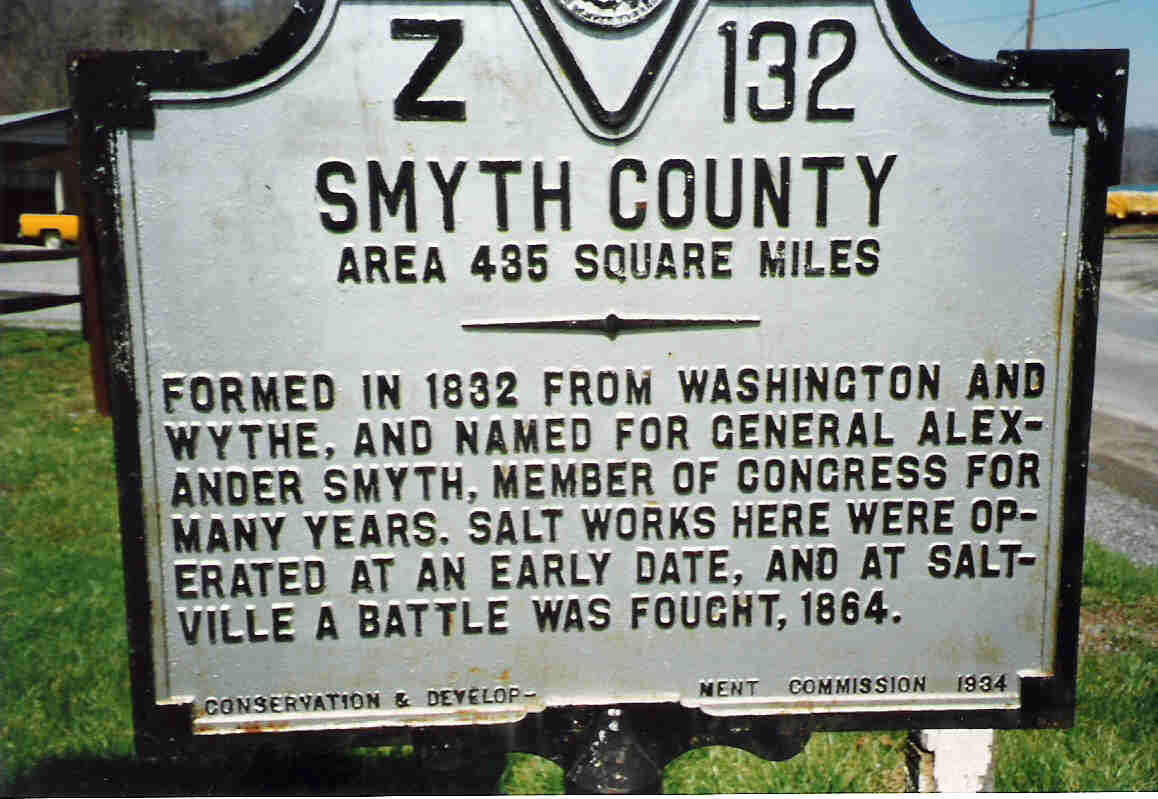 Members of Wise County Historical Society traveled to Saltville in the Spring  of 1996 seeking information on the town for the first issue of our magazine, “The Appalachian Quarterly,”  (Editor: Rhonda Robertson).  It was a very interesting and rewarding trip.  From the June issue of Appalachian Quarterly, the following excerpts: Saltville Boasts A Long And Rich History by Roger A. Allison

The “Archaeological Dig” Site at Saltville

The Historical Society visited a “dig site” in Saltville; the King-Stuart House, where  Flora Stuart, wife of General J.E.B Stuart (deceased) , and her children lived which was built in 1795 by William King, another of Saltville’s early salt manufacturers; the Battle Site; the Salt Kettles site;  Mrs. Russell’s Methodist Church and home; the Museum;  the Mattheson Chemical Corp. train, which was probably used in the Salt works, and library. (Photos above)

This is where the bones of a Wooley Mamoth was found.

Published by the Saltville Progress,February 22, 1996

“The town of Saltville is celebrating this year the centennial of its incorporation as a town in 1896 but not 100 years of its existence as some have said.    The town of Saltville had existed for almost 150 years before it was incorporated.   That’s why the newly adopted town seal contains two dates – 1896 – the date of incorporation, and 1753, the date of the first land grant in Saltville Valley, issued in the name of King George II of England,

Salt, one of the world’s most common substances is the town’s reason for being.  It is the presence of salt which assured the town of its rich history.    Over the millennia that vital substance had been responsible for drawing into the Saltville Valley giant mammals, now extinct; settlers, colonial and pre-colonial; members of some of early Virginia’s and America’s most prominent families; invading Union armies during the War for Southern independence; and major industry, which ushered the town into the 20th century.

The Saltville Valley is a virtual graveyard of the first-known visitors to the area. It is almost impossible to dig a ditch or well of any great extent without uncovering the bones of mastodons, wooly mammoths, giant ground sloth’s, musk oxen, and other prehistoric creatures which frequented the valley 14,000 to 10,000 years ago.

The first recorded find of the remains of these animals was made by Col. Arthur Campbell in 1782 when he dug the first well for the manufacture of salt.  Campbell presented his discoveries, “bones of uncommon size” to a collector friend named Thomas Jefferson, who recorded the find in his 1785 “notes on the State of Virginia.”

Since that time there have been dozens of recorded finds and, no doubt, scores of unrecorded discoveries throughout the Saltville Valley.  Some scientific archaeological digs were conducted following accidental discoveries in 1917 and in the mid-1960’s, and since 1980 the town has hosted summer digs almost annually.  The Virginia Museum of Natural History and the Smithsonian Institute has conducted digs each summer since 1991..”

Identification of  Photos Above

Elizabeth Russell was born Elizabeth Henry in 1749 in Hanover County, Virginia, sister to the well-known Patrick Henry, Governor of Virginia.  She married first to General William Campbell, of Augusta County, Virginia and second in 1783 to General William Russell, of Revolutionary War fame.  They moved to Saltville in 1788.  General Russell built salt houses, the first salt wells and a furnace, sometime between 1788 and 1797 with Francis Preston.  Russell dug his first brine well in 1788.  The well was located near the Russell home where the salt was produced by evaporating brine in a large salt kettles.

“Madame Russell is probably more eminent in the Methodist pioneer history of America than any other woman.  In Saltville, in 1824, a Methodist Church, Elizabeth Church, wad dedicated in her name.  In 1898 construction was begun on a new Methodist church, located a few feet from the then still standing Russell home.  That church, Madam Russell Memorial United Methodist Church, stands today as a monument to Mrs. Russell, the region’s earliest religious leader, and to the pioneer Methodist Movement in the Holston Territory of Southwest Virginia and Northeast Tennessee.  In present day Saltville, there now stands a beautiful stone building named “Madam Russell Methodist Church.”  Nearby is a replica of the original log cabin where the Russell’s had lived.  This is owned by the church.  The stone  doorstep of the church is said to have been the hearth in the Russell cabin.”