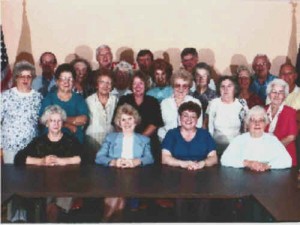 Dorothy Hall Witt, traveled to  Lee County, Virginia,    to sit in on their Heritage book committee meetings at the Jonesville Courthouse.  She knew that there were two volumes of the Russell  County book, and that a group was working on the Scott County history so she was in hopes of a heritage book for Wise County also. Dorothy found that to get started on a possible book for Wise County she must get together a group of people.  When this had been accomplished the first meeting was held at the Appalachian Regional Hospital, November 7, 1991 with 14 members present.  Officers were elected at that meeting.   The committee met at least once a month and sometimes more often. The membership grew in number and with much enthusiasm.

By the summer of 1992, some of the members, especially Dorothy Witt and Wanda Rose, were traveling all over the county spreading the word about the  book at  fairs, church homecomings, class reunions, and in private homes.  The committee held meetings at every  town in Wise County with the exception of Norton, in order to reach those who could not come to our regular meetings.  Dorothy relates:  “It was such a joy seeing old friends again and making new ones.  We spent many hours listening to older people tell about how times were when they were growing up in Wise County.”

Some of the members spent countless hours  gathering information, photographing pictures, selling ads,  proofreading and getting the book ready for the press.

“We were pleasantly surprised to find that so great a number of those born in Wise County have become, not only locally, but nationally and internationally known.  Wise County is proud to be the birthplace of Miss America of 1993, Leanza Cornett, and also the National Easter Seal Poster person for 1993, Virgil Craft of Wise who has contributed much to this book.”

From November 1991, our committee grew to sixty interested persons, culminating in the organization of the Wise County Historical Society in August, 1992, with 61 charter members.

In 1993 THE HERITAGE OF WISE COUNTY AND THE CITY OF NORTON, VOL. 1  rolled off the press.

A beautiful book, forest green with gold lettering, hardback, 9 x 12 and  contained 515 pages. We were proud to now have our own Wise County Heritage book. The Heritage of Wise County and City of Norton 1856-1993

Members of the Board of Directors:Appalachia: Dolly Opal Watson; Big Stone Gap: Dot Carroll; Coeburn: Bill Porter; Norton: Paul Kilgore; Pound: Blaine Sturgill; St. Paul: Leroy Hilton; Wise: Fannie Steele.  Since this election, some new officers and members of the board, have been installed and others are no longer with us. 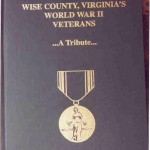 One of most exciting projects of the Wise County Historical Society was spearheaded by Rhonda Robertson and Wanda Rose.  This was putting together WISE COUNTY VIRGINIA’S WORLD WAR II VETERANS: A TRIBUTE.    The book contains 929 pages, with over 6,000 veterans sketches and over 3,000 photos.   Rhonda and Wanda spent several thousand hours typing, copying photos and preparing the book for publication.  It was a momentous event when the books arrived on August 15, 1995, the 50th anniversary of V-J Day. This book was submitted to Tom Brokaw of NBC news during his series of “Home of the Brave” broadcasts about WWII. It was also placed in the Library of Virginia, and other libraries. 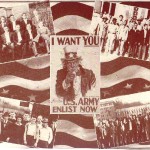 In addition to the Veteran’s book, a commemorative calendar of Wise County  during World War II was  published containing pictures and historical events of the War and of the county.

In June of 1996 the first issue of our historical magazine, “The Appalachian Quarterly,” debuted.  Rhonda Robertson is the editor, Ganell Marshall, associate editor. The magazine is published four times a year and contains exciting articles on our region and the southern Appalachians.  The subscription was $10.00 per year for several years, but with rising costs of postage  and paper, we had to raise the price to $12.00 per year. The subscription includes a years membership with the historical society.

The Wise County Historical Society welcomes you to join the membership and join in our activities. It is hard work but great fun. 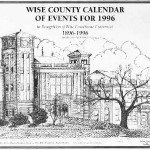 The Courthouse Centennial was  approaching fast and the society got busy  planning their Courthouse Centennial (1896-1996) calendar. The  calendar contained upcoming events in Wise County in 1996 as well as several old pictures of Wise and other towns in Wise County.  That same  year, the society reprinted the Banner Community Heritage which was compiled by a  member of the Historical Society, Bill Porter.

The next project for the Historical Society was assisting Denver “Bud” Osborne in the publishing of his famous book, WISE COUNTY’S APPLE BLOSSOMS OF YESTERYEAR.

book is a precise history of the apple industry in Wise County.  The book committee consisted of people in Wise county who owned or had interest in  apple orchards. Wise  County was once noted for its unique delicious apples. In 1945 Wise county produced 300 thousand bushels. The beautiful apple  blossom cover for this book was taken of  our  member and co-workers Fannie & Letcher Steele’s apple orchard.

In 1997 the historical society started planning for THE HERITAGE OF WISE COUNTY AND THE CITY OF NORTON, VOL. 2. The book was published in 2001. This book is distinct from Volume 1, but has the same forest green  coloring with gold lettering, hard back  It has 1133 pages including the  index and is 9 x 12 in size. The many hours of hard work that went into this  book  is tremendous.  This book is filled with stories and illustrations about Wise County and its people.  Another heritage book of which the Wise  County Historical Society is very proud.

The Historical Society has set headstones to mark the graves  for 37 Civil War Soldiers of Wise County who had no stones or deteriorated ones.

Lillian Gobble and Rhonda Robertson are instrumental in locating and erecting stones for Wise County’s Civil War soldiers and spends hours documenting their service and ordering stones from the Veteran’s Administration. 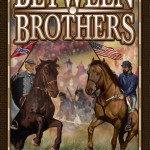 Note: Between Brothers, Civil War Soldiers of Wise and Dickenson Counties, A Biographical History,  was available in June of 2004 and is a  popular item at the Historical Society office.

In May of 2000, the Society sponsored its first Family History Days on the lawn of the courthouse, where people came to swap family information with genealogists and members of the Historical Society. The family History Days proved to be so successful, that  Family History Days, number 2 was held this year 2002, and another is planned for 2003 which will be a Civil War theme.

The Society has worked with school students in helping them with their family histories, going back several generations for their projects in school.

All the work of the Historical Society is strictly volunteer.   The office is open in room 250 at the  courthouse, Monday through Thursday from 9:00 A.M. to 4:00 P. M, and on Friday from 9:00 to 12:00 noon.  The Society maintains a bookstore in its office at the courthouse in Wise, with hundreds of area and family histories, and records to choose from.  It has a database of almost 4000 books, magazines, records, and other articles in its archives. The society works cooperatively with the Circuit Court Clerk’s Office and other county officials to help preserve Wise County history.

The Historical Society has over 1000 members and subscribers to the Appalachian Quarterly. It has assisted thousands of people visiting the county from all over the United States  in searching for their roots and other historical facts.

Help us to preserve the history of the area  and families of Wise County.