Details on how to find each is included in “Southwest Virginia Crossroads,” a new guide and history book by Joe Tennis

Details on how to find each is included in “Southwest Virginia Crossroads,” a new guide and history book by Joe Tennis 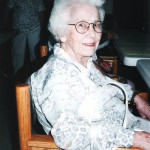 Formula recommended by the National Archives

Note: A Milk of Magnesia tablet in a quart of club soda overnight, pour into a flat pan and soak one hour.  Remove and pat dry.  Lay on flat surface to completely dry before moving.

By “well-seasoned”, I presume that the plastic bag should be exposed to the air for a long time before using.  Maybe there is something left in the plastic after manufacturing that should be allowed to evaporate. (Gladys Stallard)

Spray with hair spray to prevent newspaper clippings  from turning yellow.  Spray three or four times about 30 seconds apart while clippings are lying  on flat surface.  If they have already yellowed, soak them for 10  to 15 minutes in a weak solution of bleach and water.  Rinse carefully with clear water and slap them on your refrigerator door or other flat surface to dry.

A First in the Wise County Historical Society Office

The wedding ceremony of Jane Hall and Bryan Dotten took place June 5, 2003 inside the Wise County Historical Society office in the courthouse in Wise, VA.  Performing the rites were J. Jack Kennedy, Circuit Court Clerk of Wise County.  Their sons, John R. Hall III and Jonathan Dotten participated by holding the rings.  Bryan is the son of Bill Dotten of Wise and Vickie Dotten of St. Paul, VA.  Jane is the daughter of Bill and Diann Porter of Coeburn, VA.  Her father is an active volunteer for the Wise County Historical Society.